PART 2 OF 2: Part 1 introduced massage therapists to tactical athletes with focus on military personnel. This post discusses research and best practices including special considerations when working with people in the military and their families. Keep in mind that therapists may not know if the client on the table is serving or has served. Massage has much to offer this population. Read Part One or the introduction to the military and other tactical athletes here.

Several studies have noted an increased use of complementary and integrative health (CIH) services among military personnel and veterans. The VA and Department of Defense is actively conducting studies looking at massage and CIH services to reduce opioid use, which impairs performance and has a high abuse potential while often failing to provide full relief (Madsen, Vaughan, & Koehlmoos, 2017). In particular, Madsen et al (2017) stated CIH is being investigated as a nondrug, nonsurgical method to manage the “polytrauma triad” of chronic pain, traumatic brain injury, and PTS among individuals in the Military Health System.

Juberg et al (2015) assessed the feasibility and acceptance of massage within the department of Veterans Affairs (VA) and found positive responses in participants and willingness of the VA to include massage as part of its services.

Fletcher et al (2016) conducted a study with inpatients and outpatients who were receiving CIH services through the VA. Participants were interviewed about their experiences and asked about which CIH therapy benefited them most. Massage was found to be well-received and reported to have reduced pain, increased mobility, and decreased opioid use.  Similarly, Goertz et al. (2013) found that overall use of CIH services  were higher in military personal (44.5%) compared to civilians (36% to 38.3%).

Partners of veterans who were taught massage to help reduce stress and promote interpersonal connectedness after their partners returned from their tours of duty in Iraq and Afghanistan reported significant reductions in PTSD and depression and increased self-compassion in both veterans and their partners (Collinge et al, 2012). Moreover, veterans reported significant reductions in physical pain, physical tension, irritability, and anxiety or worry. Their partners reported a reduction in stress. Another study investigated the effects of massage among women veterans with chronic pain and found massage decreased pain and prescription analgesic use as well as increased relaxation, body and mind connection, and feelings of trust and safety (Price et al, 2007).

Clearly more research is needed, but it is important to understand that this population is as wide and diverse as the general population. Treatments should be based on research with all active populations, while keeping in mind the special considerations listed next. Research conducted on active populations showed improvements in stress, muscular pain, range of motion, low back pain, sleep and other positive outcomes, which suggests that massage could be a powerful treatment for tactical athletes, Veterans, and service families. 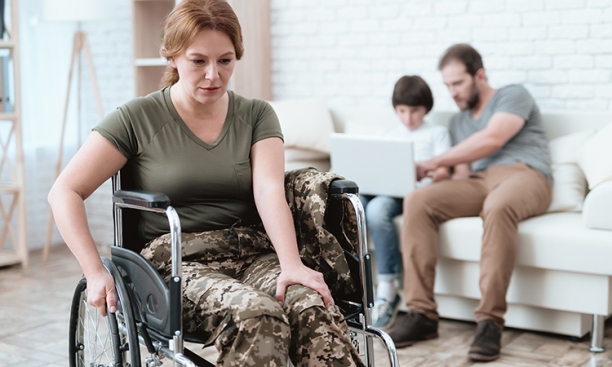 Woman veteran in wheelchair returned from army. A woman in a wheelchair is in pain. She’s in military uniform. Her family is sitting behind her. 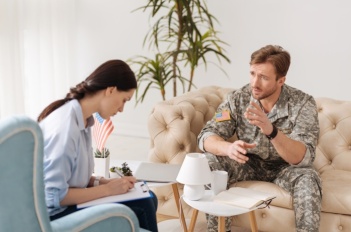 Assure the client that all information disclosed is confidential. Active duty personnel may not want their Commanders to know that they are having issues.

Use questions related to the client’s specific jobs or duties which may include asking if he or she has been in a vehicle roll over, have shrapnel in the body, have been exposed to explosions or IED blasts, or has hearing issues. These kinds of questions build rapport and clients are usually relieved that the therapist is aware of these possibilities and issues can be openly discussed. Keep hearing loss in mind when you give instructions or ask questions. Eighty percent of military service persons reported hearing loss in one or both ears. If hearing loss is confirmed, ask if the client has a “good side” for hearing – keep this in mind during conversations. Some clients may be embarrassed by hearing loss and not disclose this without being asked.

Be mindful of post-traumatic stress (PTS) as the majority of tactile athletes have some form of PTS. PTS manifests in several ways and ranges from unnoticeable to serious. Loud noises, bright lights, or unexpected events (door opens suddenly) may generate a response. For new clients, the response may be unexpected for them also. PTS may worsen with age, showing up in veterans later in life as their fellow service members pass away. U.S. veterans who had PTS and head injury experienced higher self-reported pain compared to PTS without head injury (Stojanovic et al., 2016) so be mindful that these individuals may have lower pain thresholds.

Thanks to JoEllen Sefton for her contributions to this article.

Read Part One or the introduction to the military and other tactical athletes here.

Dr. Susan Salvo is a massage therapist who works with massage therapists and students to promote best practices. Susan knows that education and research are the most effective ways to advance the profession. She teaches, is actively involved in research, and has written two widely used textbooks: Massage Therapy: Principles and Practice and Mosby’s Pathology for Massage Therapists. Susan has been honored with numerous awards and frequently presents at conferences and conventions across the country. Susan has a doctorate in education from Lamar University. You can contact Susan at susansalvo@hotmail.com.